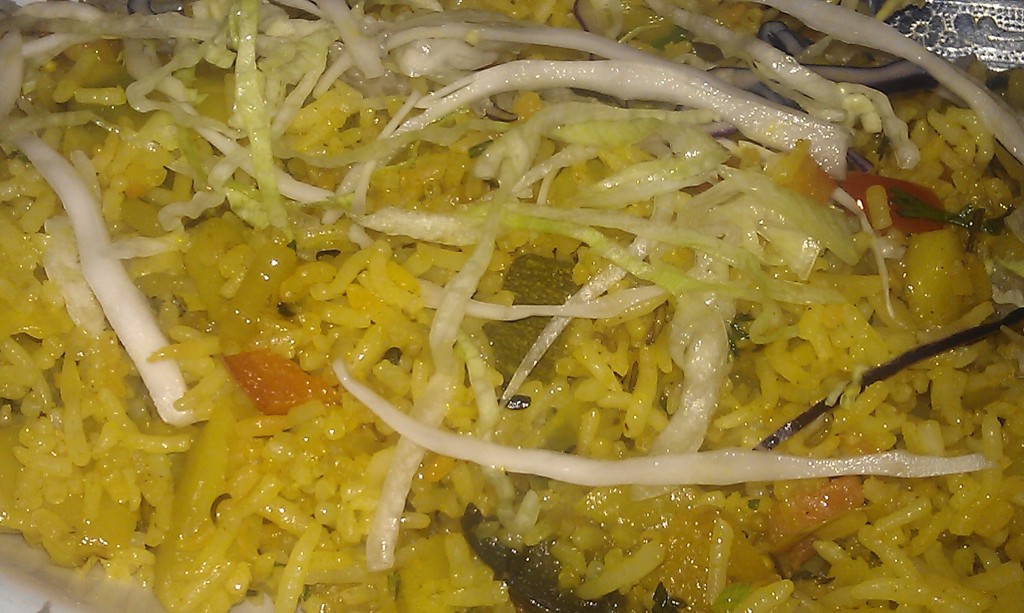 First of all, a disclaimer: I’m an Anglo veggie who doesn’t know her masala from her elbow so read on with caution…

Poornima and I went for lunch at the South Bank Tandoori. I do like a restaurant with a bit of warmth and character – most near our office in London Bridge are made entirely of glass and chrome – but this one was as hot as a stag night vindaloo, inexplicably steamy and almost completely dark. So I felt a little like I was eating a biryani in a brothel, which was disconcerting, but at least I can now tick that off my ‘things to do before I die’ list.

Once we both adopted a slightly startled, wide-eyed stare and our vision adjusted, we ordered a vegetable biryani and paneer shashlick. I’m a big fan of paneer dishes as my husband has banned anything resembling cottage cheese from our home, believing it to be the devil’s food. But this was a particularly nice way of doing it, seasoned and grilled with onions and peppers. I was especially impressed with the onions which were grilled to crisp rather than half cooked and floppy.

The main event biryani was, to me, splendid – subtle and light and not at all greasy. Poornima’s expert tongue detected a hint of curry powder rather than individually and lovingly crushed spices, but I‘m too much of a philistine to notice and I thought the flavour was great, wherever it came from. It came with a vegetable curry sauce, which apparently (I defer to the font of all biryani based knowledge here) was in the Bengal style and therefore sweeter than usual. Sweet it was, which I liked, but then I go for way sicklier coconut curries and have an ongoing battle with my addiction to Haribo sweets, so it was always going to go down well with me. If you like your food heavier, and indeed spicier, it might not be the one for you.

All in all I left with a nice taste in my mouth and without a bubbling, rumbling swamp of MSG and grease in my stomach, causing social embarrassment all afternoon. Which was a bonus.

Meat/veg harmony – for me, perfect in its absence.

Potatoes – honestly, I can’t remember. They didn’t offend me, if indeed there were any.