I am, if I must confess, feeling a bit lonely in my quest this week. I have lost the boy, my most vociferous supporter, to the India-England cricket series – he prefers to subsist on a diet of cricket rather than biryani; the husband has had two viral infections in a week and can’t bear to think of food; and my mother is just back from Switzerland and prefers to hang out with her grandson.

So, it’s just poor old me on the quest this weekend and you know what – I have decided to recycle. I am going to review the Veg biryani we had from Kadiri’s last week. So there. 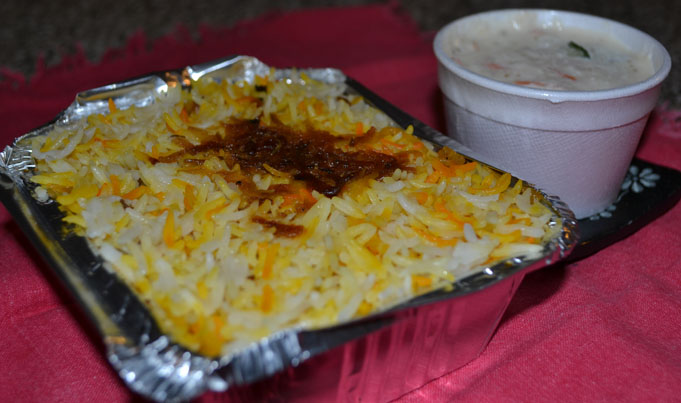 Now, the purists amongst you might turn up your nose at a veg biryani, for wasn’t biryani originally invented for meat? That’s right, and probably for fish. But what about all the vegetarians in the world? What if they want to partake as well? Surely you can’t deny them the pleasure?

And so I take upon my good self the task of finding you the perfect veg biryani in London and so what if I have to kiss a lot of frogs in the process.   You might remember my raving review of the chicken biryani at Kadiri’s and recall how we might have found the most authentic biryani this side of North London. So, what’s their veg biryani like?

Not bad actually. In fact quite good, but obviously not a patch on their chicken biryani as might be expected under the circumstances. My one complaint though was that the biryani needed some kind of complementary dish other than the raita that was provided. Maybe some veg gravy. Or even a little bowl of dal.

Here is how it scored on the Biryanometer:

So, quite a good rating…but come on everyone, can we have some more effort on veg biryanis please? The vegetarians of the world need you!