Ages ago the Pevensies used to live around here, in these rows and rows of terraced housing before finding magic at the back of a wardrobe. These days the Finchley Central high road is pretty much your average London high road.  A line of shops that change every few years as businesses start and fail, get boarded up, get refurbished, and start up again. The kebab shop by the bus stop that changed into a fish and chips shop then back into a kebab shop that morphed back into a fish and chips shop. That failed.

Then Meera opened her Xpress doors and offered Gujarati food chap chap for those in a relative sort of hurry. Fast food Indian style: it takes a bit of time and is best ordered in advance over the phone. Bright lights. Garish spices.  Open kitchens with already prepared saks heated on demand in steaming pans by the Meera equivalent of kids flipping burgers. A thali has been interpreted into a take away form.  The prices are worker and family-take away friendly.

And the place has remained open ever since.

“Simplicity is the ultimate sophistication” misquotes Nigella in her new series Nigelissima, attributing this to Steve Jobs when, apparently, it ought to have been Leonardo (da Vinci, duh, you people, not di Caprio).  And indeed in this old town, everything these days, is a push to simplicity.  In fact, this simplicity is so complex that it’s bewildering. Real oatmeal face scrubs (i.e. not the fake ones we have always, apparently, used). Shampoos without parabens (what are these, and how come shampoos till now have had them?  What on earth have they done to our heads?).  Organic food is good (organic food lobby).  Organic food isn’t that good (non-organic food lobby).  Butter is good (butter and anti-trans fat lobby). Butter isn’t good (margarine lobby). Meat is good (meat industry lobby). Meat isn’t good (vegetarian lobby). Dairy is good (dairy lobby).  Dairy isn’t good (milk alternatives lobby).   And McDonalds sells Fair Trade coffee (Oh. Good. Grief).

I need some paracetamol, because this is headache inducing stuff.  Ah yes! Paracetamol!  Which market-segmented paracetamol alternative would you like? Day-time, night-time; drowsy; non-drowsy; active; citrus; combo; branded or own brand?

It all leaves one with a sense of helplessness. Exit therefore, rapido, this fiendish supermarket that sells everything, including simple but complicated things (my only purchases, by the way, were a newspaper and a very guilty bar of Milky Way, same look and packaging circa 1993) and head into comfort territory. Take away.  Meera’s Xpress.

I wanted something complete, yet simple and tasty, so I asked for Meera’s veg fried rice, to go, with a few samosas on the side.  Sufficient to say about the samosas: very good, crisp and non-oily outer, but a tad sweet – which is, I suppose, the prerogative of Gujarati cooking.  Serve with coriander chutney from AtoZ, and they are lifted into something quite special that could transport one into Aunty S’s place in Tanga, Tanzania, for the few minutes that it takes to devour a single. 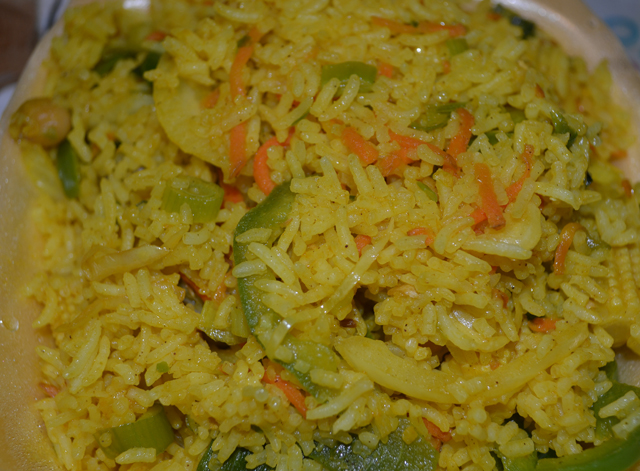 But to the rice (albeit circuitously) and therefore to the point.

Meera’s Xpress have not skimped on ingredients.  The menu says “vegetable fried rice” and that is what is delivered. Vegetables. In rice. And fried.  There are onions in there.  Bits of carrot.  Peas.  Capsicum. Wee bits of cauliflower. One or two blobs of channa. All cooked well enough. So far, so ticked.

The rice is yellow.  This could be pleasing – a strand or two of saffron, for example.  It could be the authentic (and normal) version of a yellow tinge caused by the turmeric used in the cooking.  Or it could equally be the quite disturbing budget faux version: a touch of “sunset yellow” daubed in the frying pan along with the palette of vegetables. In this case it’s turmeric.  So far so ticked. Deux points.

Side note:  I wish things were this simple in supermarkets.  A friend once said, “give me three choices: expensive; middle; and cheap and I’ll make my decisions based upon my purpose.”   Viz:  Expensive = saffron; normal = turmeric; cheap = sunset yellow.  Purpose = ingestion.  Choices = only ever normal and occasionally expensive. Avoid cheap. Unless, of course, in luddos, in which case unavoidable, and sunset yellow amongst all the ghee and sugar is the least of one’s worries.

Had Meera’s stopped right there, the vegetable fried rice would have been sufficient and satisfactory, and for the price, reasonably good value.  But like all simple things in this place, there has to be complications.  Adding herbs to the oatmeal face scrub.  Oil to the butter to make it spreadable.   A whole supermarket row full of different flavours of paraben-free shampoo.  Milk that is no longer delivered in the delightful recyclable glass milk bottles in a society that increasingly values recycling.  Front garden gnomes to add magic where it can no longer be found in backs of wardrobes.  And mono-sodium glutamate, MSG, added un-necessarily to vegetable fried rice.  Not just a little, but bucket loads.  Therefore requiring a large glass of cold water as an accompaniment (well at least these days au tap is acceptable).  And, sadly, a poor rating for the dish from your guest critic. Null points.