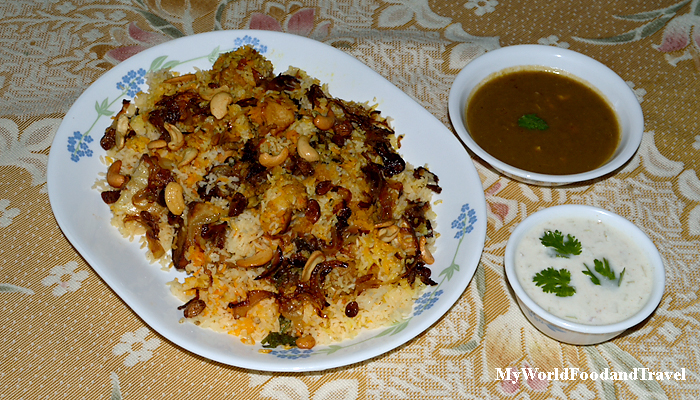 I love my biryani. Just like Poornima, I search for the plate of perfect biryani in every city that I venture into, besides scouring the worldwide web for the perfect recipe. In fact, that’s how I stumbled onto this wonderful space. Actually, I should be researching on real estate instead, as that’s what my profession is all about. Rather a dry subject for one who loves to travel and eat.  Hence, I try to give vent to my wandering soul through my blog www.myworldfoodandtravel.com.

For a biryani fan like me, it’s a pity that despite my best efforts, I was not able to recreate the dish at my home. I looked at a number of biryani recipes and eventually decided on my own. My main issue was that I did not have a large flat bottomed vessel. I had only my faithful pressure cooker to rely upon. Somehow, everything worked out just fine and my pressure-cooked biryani turned out to be really delicious.

Anyways, let me share with you my version of chicken biryani. I was cooking for a large group (8 people) and hence my measurements are likewise. Do adjust the amounts according to your requirements. Also, since I was cooking with 1 kg rice and 1 kg chicken, I had to cook in two batches in my pressure cooker.

Let me leave you with an image of my favourite biryani. It is called LahamMandi (Laham for goat meat/lamb) and is served by a small, non-descript restaurant called Ta’am in Bangalore. It is basically an Arabic dish and is served with a small bowl of soup, packed with tremendous flavor, and two chutneys – one, a tangy tomato-garlic chutney and the other a mint chutney. The Mandi biryani is fragrant rice steamed and cooked with grated vegetables and smothered generously with the soup so that it remains moist. It is lightly spiced and feels quite light on the stomach, too. The biryani comes with a huge hunk of goat meat, which I think is the entire raan (leg) of a kid goat. The meat is meltingly tender and gives away effortlessly from the bone when prodded with a fork. I can never have enough of this dish! 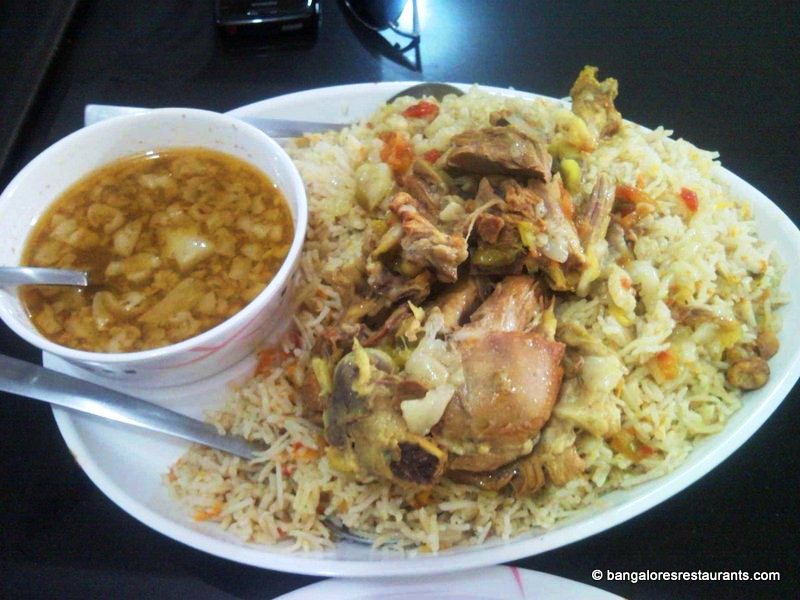