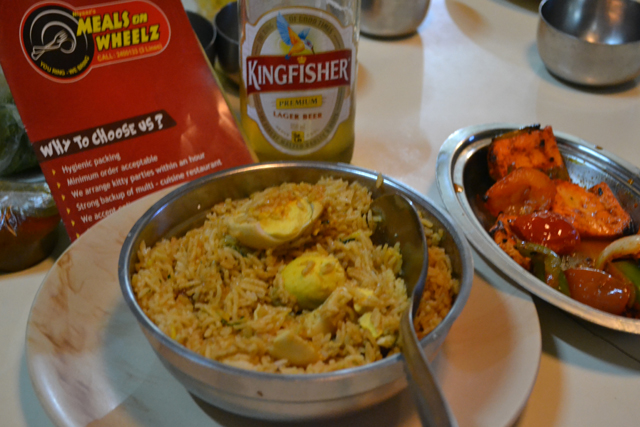 This is absolutely the last post on Indian biryani – I promise! Oh, but what to do for this great homesickness, exacerbated all the more by a visit to our home by a friend of mine from India.

In the manner of all my Indian friends, he walked in for dinner, took his laptop out of its case, asked for my wifi password, logged on to You Tube and thereafter embarked on a discussion of classical Indian music with me and my mum – in three different languages. Husband at this point as usual disappeared for some “urgent accounting work”, son hung around listening to the rapid fire discussion desperately searching his database of Hindi and Marathi words to find out if there were any cricket references and then gave up and went to watch the IPL.

And so, instead of trying to find a new biryani to try this Sunday, I have spent all morning listening to Indian music and wondering whether I should watch a Bollywood film. That’s when the husband reminded me of the Egg biryani we had in India and how we were both impressed.

a) that there was actually a biryani delivery service (Niyaaz, Mealz on Wheelz!) to our house in the outskirts of Belgaum that was for many years occupied only by us and the odd wild animal.

b) that we had actually overlooked the chicken biryani and thought of ordering the egg one because it looked so good in the photo on the garish menu.

And by gosh, it was the right choice! The eggs were boiled and then deep fried just a little bit, the biryani rice was flavoured exactly the way it would be for a chicken, lamb or veg biryani and overall the dish was fantastic.

And so – you will see there is a point to all this meandering: the egg biryani has opened up new frontiers for us here in London. It has made us boldy go etc etc.

Meaning to say that I will be on the look out for egg biryanis now  – and not just chicken, veg and the occasional guest reviewers for lamb biryanis.