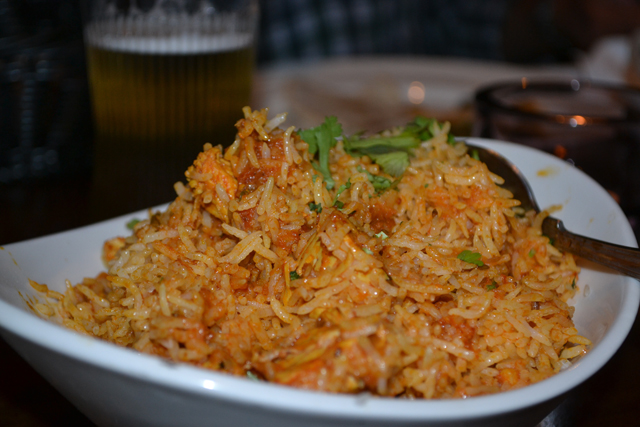 People who know us are always bemused by the fact that we have had three wedding ceremonies – one in each of the three continents that we have connection with. So, it was our African anniversary last week.

10 years. Or “10 loooong years” as my husband would have said to my late dad on his congratulatory phone call – the same joke repeated every year and eliciting the same amount of disproportionate mirth from the father.

Anyway, we celebrate all three anniversaries as we do every event in our lives: with good food and the son in tow. Normally we would have steered away from Indian food and gone to a posh Italian or French restaurant but with the quest consuming our lives – all three of us decided that it had to be an Indian this time.

But where to go? Luckily for me, my friends in India keep an eye out for good biryani places in London (yes, I know!) and one such friend pointed me in the direction of Masala Art in Harrow, which is owned by one of her friends. We dug the website out, drooled over the pictures of food, sorted out the menu in our heads, and jumped into the car for a crushing 45 minute drive. Only to arrive at an empty restaurant with two very charming waiters who sorted us out with some delicious poppadams on the house. The starters were very good – we ordered chicken tikka and seekh kebab – and based on this we went completely crazy over the mains. We are a family that normally over orders but the scale of what we ordered that night was a feat even for us. Dal Tarka, Bhindi sabji, butter chicken, aloo jeera (not on the menu and rustled up pretty badly; husband felt cheated) and the ubiquitous chicken biryani served with raita or with gravy.

I was pretty full before the food arrived so took a couple of spoonfuls of everything else and eyeballed the biryani. It sat there in a pristine white bowl looking very innocuous. I took a small bite – nothing. Took a second bite – still nothing. Told the husband to have a bite, but he was too busy feeling cheated by the Aloo Jeera and did not comply. That’s when it hit me. Mr Charming Waiter had forgotten to get us the gravy or the raita! I asked for the gravy. It arrived. I had another bite and whilst it still did nothing to me, the scale of nothingness was less severe. It was an OK biryani.

Here is how it scored on the biryanometer:

Masala Art is a very nice place and has great potential but that night the food didn’t do it for us. The waiter, noting our disappointed expressions – especially the son’s – told us that the regular chef was off duty and they had a different chef that night. This probably explains a lot of things. Also, as you can imagine we took most of the food home and had it for dinner the next day and it tasted pretty decent.

So? Well, our Indian anniversary is coming up in a couple of weeks. We are definitely going to that twee French place in Crouch End. Just saying.