STOP PRESS! I may have found the most authentic biryani thus far: it is in a restaurant called Kadiri’s, an unassuming place on the high street of Willesden – a place I must confess I have never been to in my life. Quite a drive for us on our way back home from Northwood, but there wasn’t a single fight in the car – not even a wind up from the son who has been functioning on very little shut-eye after a sleepover at the London Zoo with his two best mates (In the bug room, no less – note how I have spared you some poor jokes here).

Anyway on to Kadiri’s – remember, last week’s post about my small talk algorithm resetting itself when people discuss food? Well, I am still all over Twitter if you must know and it was on this microblogging service that I was first directed to Kadiri’s by a tweeter called Zoe (@TheSpiceScribe). Thereafter the nice manager of Kadiri’s tweeted me and suggested that when I order the biryani I should instruct his staff to add potatoes to it. What a refined man this is… and what a refined website the restaurant has: there’s an entire page on biryanis titled: “Kadiri’s Biryani – The London King of Biryani”.

We got the biryani home and I almost got lynched for wasting too much of time taking photographs. The son had the first mouthful and proclaimed it brilliant, I had my first bite and was transported back to Bombay; and the husband voted it the best biryani he’s eaten in London so far. 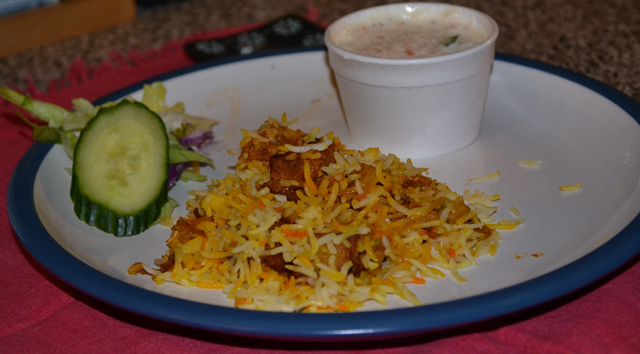 Here is how it rated on the Biryanometer:

Potato Content: Great! But the son has asked me to deduct 0.1 from the overall rating because the potatoes were less.

Biryanometer Rating: 4.8 to 4.9 (no consensus was reached)

So what makes it so special: a) it ticks all the boxes on the biryanometer b) it gets full marks for authenticity.

Our only complaint – Kadiri’s is quite a long drive from us for it to be our local.

So, has the quest ended? No!

Thankfully, as some of you have pointed out I haven’t ventured far from North London and so the quest must doth continue… (all the biryanis I eat in the interests of research, I tell you).