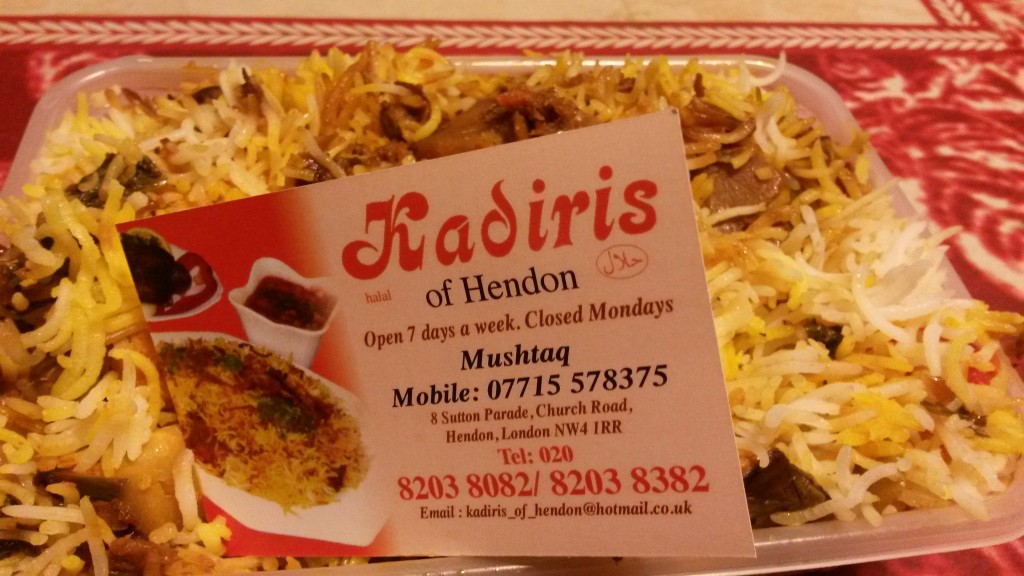 Last Saturday after a long bike ride with some friends, we realized that we had found the biryani that would wear the yellow jersey.

It started like this: husband’s aunt kept mentioning a place called Kadiris in Hendon. As I had already tried a restaurant of the same name in Willesden I spoke knowledgably of the food with her and thought that was that. And then a couple of weeks ago, I actually passed by Kadiris of Hendon, as they call themselves, and was intrigued.

And thus it was that we found ourselves in this little shop collecting a chicken biryani from the extremely polite young man at the counter. The husband took one whiff and bitterly declared to me that this was going to be THE biryani – bitterly because he was going out for dinner with the boys and was shocked that we had the temerity to enjoy ourselves without him.

After a quick fistfight at home to get rid of the husband and his tasting spoon that was making great inroads into our biryani, the son and I settled down to enjoy – wait for it – the BEST BIRYANI I HAVE EATEN IN THIS COUNTRY SO FAR.

Should I stop shouting?

It was superb and tasted pretty much like the biryanis I have had in Bombay. It was so good that words fail me actually – which is pretty sad for a food blogger, right?

Anyway, here is how it scored on the old biryanometer.

Yes, ladies and gentlemen – a 5/5 (overlooking the lack of potatoes – my mum fried some for us). I have found my local biryani – but has the quest ended?

Of course not – Kadiris of Hendon has a veg biryani that I want to try out and a fish biryani only on Thursdays.

And after that – what if I am in central/south/west London and get a craving?