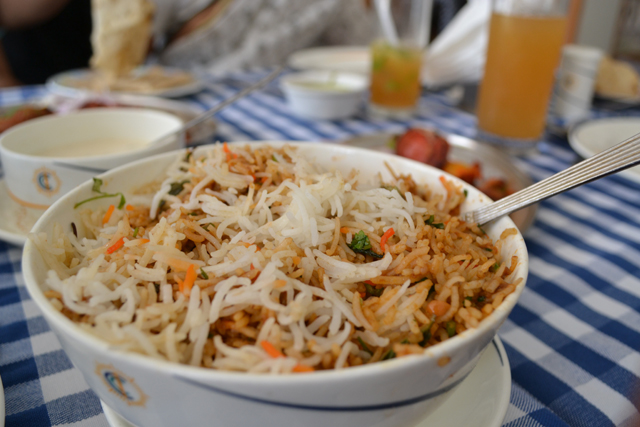 OK – I need to stop being such a “back home in India” bore. But maybe a couple of posts more?

(And incidentally, hello, you have signed up for a blog on Indian food – so deal with it!)

Deciding to avail of reciprocal club membership and stay at the Cricket Club of India was a masterstroke of genius – my idea obviously and the husband has been doing it even before he met me. But as I said, my idea obviously.

The CCI is in the heart of the Bombay we grew up in and is conveniently close to all our old haunts – the Wankhede Stadium, the Oval cricket maidan, Colaba Causeway, Flora Fountain and of course dear old Gaylord Restaurant – my most favourite place in the world, not for its (expensive) food but for its waiters. Hands up, if you’ve received a congratulatory telegram on your wedding day from the waiters of your favourite restaurant. Well, I have.

But I digress. We spent about a week at the CCI eating some of the most delicious food in all its restaurants – after all, some of the top chefs of Bombay are associated with the club. For some strange reason, it was only on the penultimate day of our stay here that we decided to have dinner by the poolside and order food from Kakori House – makers of the “very best of North Indian cuisine”, in particular its Dum Murg Masala Biryani, aka extremely delicious chicken biryani.

One mouthful of this biryani resulted in a profound epiphany. Ready for it?

The reason biryanis taste so perfect in India is because the meat/veg element is part of a whole and not just an individual component – an after thought even – of the dish.How to explain this without going all alternative and talking about wholeness, integration, amalgamation of complex flavours; intricate flavours rolling off your tongue; spices exploding inside your mouth; a lightness of being (oops – sorry, wrong blog, this one is for my musings on alternative therapies) etc.

I won’t – can‘t – explain this. But by God I am not going to give up the quest to find that delightful wholeness in a biryani in this country. So, onwards and upwards.

In the meantime, the husband and I have revised our plans for any potential Lottery winnings. With apologies to our son and our two nieces, we are going to squander their nest egg on a nice flat close to the CCI. However, with real estate prices in this part of Bombay being one of the most expensive in the world, we might have to win two Euro Millions to do this!