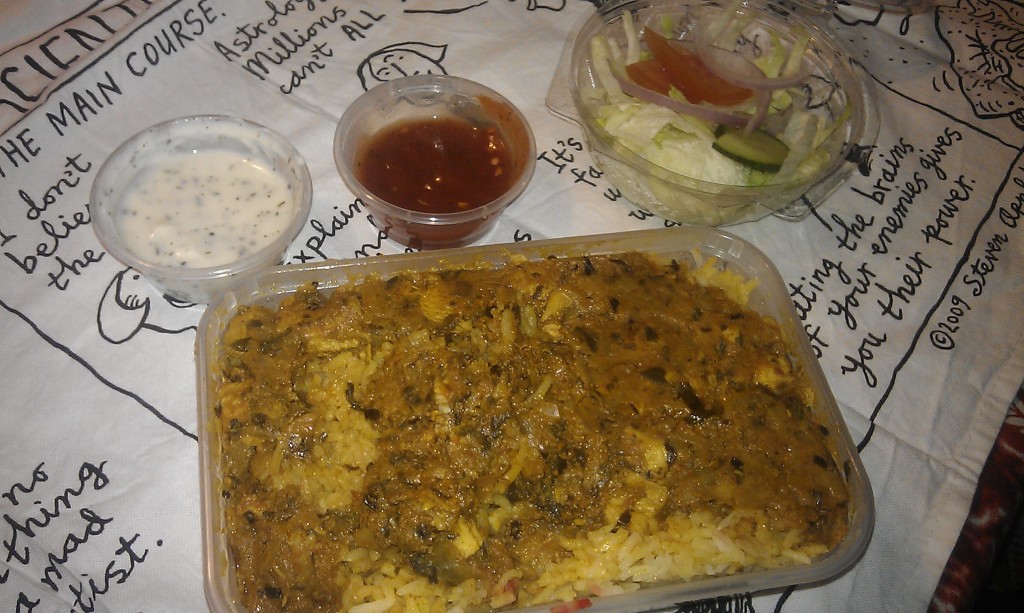 I first heard about the twice-a-week food market at Whitecross Street on twitter from the handle @zemblamatic who is very partial to the biryani sold at the stalls here.

I was intrigued and waited for a couple of months until serendipitously the husband had a business meeting there – only to find out that the stalls are open on Thursdays and Fridays.

When a meeting was scheduled on Thursday this week, both of us took this as a sign. The son, who was to accompany the husband owing to school holidays and the need to get accounting work experience (just joking, he is 8!) was very excited as he seems to be embarking on his own chicken tikka quest.( His blog will be out soon after he completes his accounting exams in September – and how I digress!)

What all three of us had neglected to find out was the name of the stall that @zemblamatic gets his awesome biryani from. A quick call to me at work for technical support yielded no luck, so the husband and son bought it from the  first stall that gave them samples of their chicken tikka (rated “so-so” by the son).  The stall was called Barbican Express  and are purveyors of the “best pizza in London” – and er, makers of biryani and other Indian food. I hope you see the connection because I don’t!

But what of the dish itself?

We got a ginormous portion of chicken biryani for a mere fiver. It came accompanied by a fresh, crisp salad, a mint raita and some chilli sauce and was very good. Here is how it scored on the biryanometer

Spice blend perfection – 3.5/5 – this is where there is slight room for improvement

If we were to nitpick it would be mainly to say that it lacked a delicate infusion of spices and so this biryani did not really tantalize the palate  (yes, Australian Masterchef last night was pretty good) but overall a superb effort.

PS: A quick tweet to @zemblamatic   confirms that this stall in fact is NOT the one he goes to – he prefers Bombay Masala. That’s where we will be heading next!

Biryaniquest is now on an Easter sabbatical and will return to review biryanis with renewed vigour in three weeks.