In the first year of our marriage, the husband mildly suggested that I reset my small talk algorithm.

We went to a lot of social events that year and I used to completely freeze at “small talk time”. Now after 10 years of marriage, to the day actually, things have not changed: the algorithm malfunction is now firmly entrenched and a simple reset will not do. Mums’ evenings, friends’ parties, office dos have a mummifying effect on me – actually even Tutankhamun’s mummy would be better company at these events.

You see, I have nothing to talk about. I do not watch Downton Abbey, Dragon’s den, X factor or Strictly come dancing. Nor do I intend to read “Fifty shades of Grey”. I can talk about the weather quite proficiently but with the current dismal climatic conditions no one is interested. I am, in short, turning into some of the students in our archaeology days that my friends and I accused of “intensifying”. Too many documentaries, too much of non–fiction, and too many leftist beliefs. Although thankfully I am still not anti–capitalist. Au contraire.

So it is with some interest that I note that the faulty algorithm sputters into action when someone mentions food. I can talk about food to complete strangers and had to restrain myself on the tube the other when one old dear said to the other that she had cooked a curry for the first time after 23 years. What was it? How was it? Who ate it? What masalas did you use? Oh no, was it curry powder??

I am now delighted to inform you that I have indulged in lots of small talk and sporadic dialogue with various people on Twitter. It was in this universe that the handle @pukkapaki, who sounds like a woman with excellent taste, suggested that I try the biryani at Alladin’s Kebabish in Hendon.  I ordered over the phone and the polite gent who answered asked me how spicy I wanted my chicken biryani. I confidently said “medium”. When the son and I went to collect the biryani, we found ourselves in an innocuous restaurant – their website is to the point: “We established in 2004. We do catering. We are specialist in Karachi Nihari, Haleem, Karachi Korma (Lamb) Paya and Halwa Puri”.

We rushed the biryani home and presented it to the husband and the visiting in-laws. There was much discussion and dissection over the dinner table. Sister-in-law pointed out that Alladin was a bit heavy-handed with peppercorns; mother-in-law was trying to sniff out the spices; father-in-law said that his source had told him that the mosque in Regent’s Park has the best biryani in London. Meanwhile, the son quietly ate his with loads of yoghurt completely oblivious to the fact that all the adults thought that the “medium” spice levels were off the scale – actually it was one of the spiciest biryanis I have ever had. But on the whole a great biryani – not quite there, but very pleasing on the palate. Our only complaint was that it was too dry and there was not a single fried potato to be seen. Tsk. 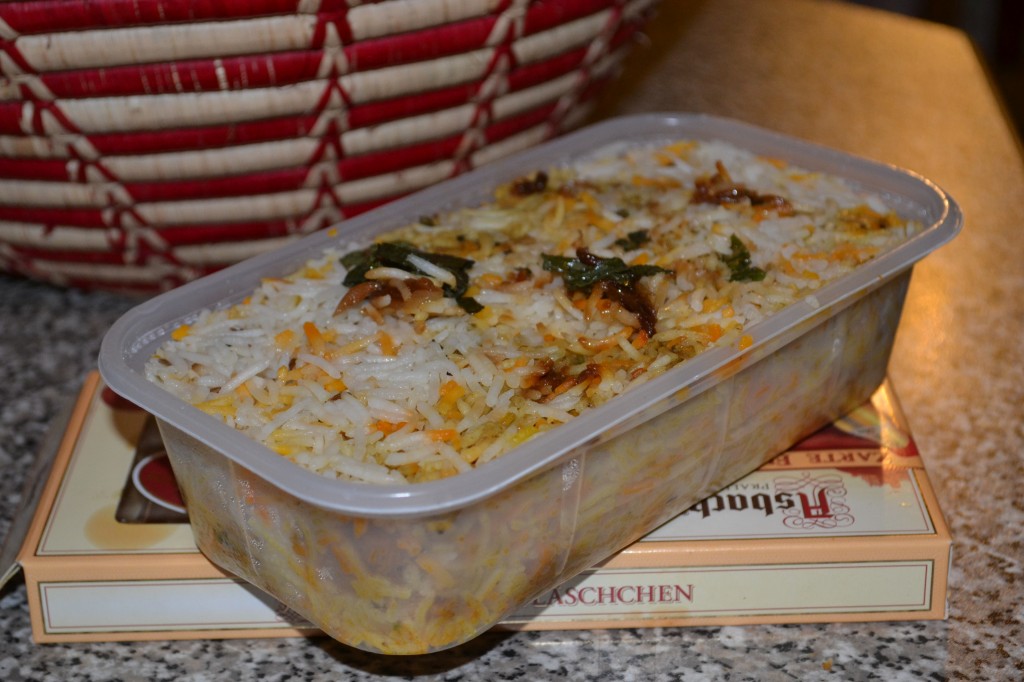 Here is how it scored on the biryanometer

Spice blend perfection: 4/5 – but a bit too spicy

We had the biryani yesterday. Today we had the leftovers with some of my dal and the taste went from good to superlative.

Alladin, call me and perhaps we can negotiate a deal – this is no ordinary dal.